Today was a special Mother’s Day for me, the first since my mom passed away this winter at 91. This post is dedicated to my memories of her.

My mom was a bit of a pack rat. When she moved a few years ago from her home of 50 years into a seniors’ apartment, it was left to her family to clean out all of the things she hadn’t managed to part with over the years. In the basement, she stored her bicycle from when she was a girl. The bikes my sister and I rode as children were long gone, so I figured if she had kept hers for 50 years then it must have had a special place in her heart.  I couldn’t quite make myself donate it to the Salvation Army. 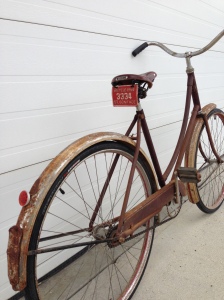 I didn’t know what to do with it, though. It wasn’t ride-able. It was rusty but still sturdy. The tires were rotten and the chain was thick with dirt and old grease. I have stored it in my garage for the last 10 years, with the expectation that someday, I would get it roadworthy. Typical of my procrastinating self, I never got around to it.

Today, my family surprised me with her bike, reconditioned and ready to ride. It now sports a new chain, some new vintage-style handlebar grips and a new Brooks seat. The seat looks just like the original leather seat which was beyond repair. The bike is still a rust bucket, but it’s roadworthy.

The 1942 and 1950 license plates provide some clues to the bike’s history. Presumably, 1950 would have been the last year she rode it, when she would have been 27 years old. I can’t help but wonder why she kept it for over 50 years. The 1942 license looks like it has been there from the very beginning, so I expect the bike is at least that old. The serial number is clearly visible, so I am hoping to be able to track down the bike’s age. 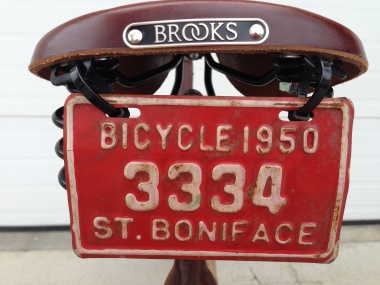 The head badge on the stem identifies it as a Garry bike, made for J.H. Ashdown Hardware Co. Ltd. (Hardware is abbreviated as HDWE on the head badge.), which is a historic Winnipeg business. The bottom of the badge lists “Regina, Saskatoon, Calgary & Edmonton.” Sleuthing a little on the internet, I found that CCM (Canadian Cycle and Motor Company Ltd.) made bikes in Canada under the “Garry” name which were sold through Ashdown’s in western Canada. Looking closely at the bike, the crank on the pedal and hub are stamped with CCM.  The “Made in Canada” badge shows an earlier stylized version of the maple leaf, quite dissimilar to the Canadian maple leaf on our flag, which wasn’t introduced until 1968.

It appears the bike was originally red with cream colored fenders. The fenders and the wheels are accented in red. The Garry crest on the head badge is red, but the paint is well worn.

Vintage bicycles are highly collectable and there are many websites and forums dedicated to vintage Canadian bicycles with sites exclusively dedicated to CCM bikes. Poking around on these websites, I am left with many questions about her bike. Had it been a CCM bike exclusively, rather than a “Garry,” it might have been a little easier to fill in the blanks. How old was it? What is it called? All of the CCM bikes had a name – the Mustang or the Flyte or the Rambler. These questions will wait for another day.

A wonderful Mother’s Day, remembering my mom and thinking of her as a young woman, riding her bike!