One of my favorite things to do while I am cycling at the lake is to connect with some of the many cyclists who are doing cross-Canada cycling trips. Our cottage, near Kenora, Ontario on Lake of the Woods, is a prime location to meet up with cross-Canada cyclists.  Highway 17 which runs along the shoreline of Lake of the Woods is really the only route a cross-Canada cyclist can take through this area of Ontario.  They stick out like a sore thumb. Their bikes will be heavily laden with panniers so they are easy to identify.  I always make a point of stopping to talk to them or if necessary, to push a little harder on the pedals to catch up to them if I see them riding ahead of me on the highway.

A few summers back, I went so far to invite two Irish cyclists to spend the night at our cottage. My husband thought I had “gone off the deep end” as he so indelicately put it until he met them and realized what charming and appreciative house guests they were.

Today, I was riding along Highway 17 and then turned off onto Highway 71 heading towards Rushing River Provincial Park when I stopped to take a picture of this monument which I happened upon on a very deserted stretch of the highway. 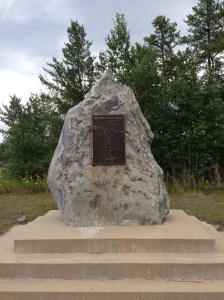 Looking back up the road I spotted the typical silhouette of a cyclist weighed down with panniers. An unlikely place to find a cross-country cyclist, I thought. This isn’t the typical route that they take. Highway 71 heads off south towards the United States rather than heading north over Lake Superior which is the typical route.

I waited until he caught up to me and then introduce myself to Cody and rode alongside him for five or 10 km. Always curious as to what their story is, I peppered him with questions.  He lives on the north shore of Lake Erie and 20 days ago started his trip in Vancouver, heading to Newfoundland.

I told him that I spent two days cycling along the north shore of Lake Erie earlier this month as part of the Cycle of Hope ride in support of Habitat for Humanity.

He tells me that he works on a boat. That seems logical to me, I think, living on Lake Erie.

“So do you work on a Great Lakes ship then?”

“Someone rich and famous?” I inquire.

I do, a bit.  David Geffen started Geffen Records which was responsible for the careers of Guns ‘n Roses, the Eagles, and Aerosmith. He also started DreamWorks studios with Stephen Spielberg.  He is worth about $6 billion.

Cody tells me that Geffen’s yacht is one of the biggest ones in the world. 450 feet long, it has a staff of 60 people.  He spends the summer cruising the Mediterranean and the winter cruising the Caribbean. Not too shabby.

You can check out the vessel at this link. Super Yacht Fan

So I pose the question: fact or fiction? Does Cody really work for David Geffen? I have no reason to believe he doesn’t but it just seems so incredible.

So David Geffen, if you are reading this (not that I think you likely are) know that Cody didn’t give away any secrets.  No incriminating stories about the lifestyles of the rich and famous.  No dirt on the great parties that you have.  Too bad. I would’ve loved to have heard some but I was getting too far away from home and had to turn back. I left Cody to ride off on his own.

2 thoughts on “Fact or Fiction?”