Just 2 1/2 hours north of Halifax, Cape Breton Island is linked to the Nova Scotia mainland across the Canso Causeway. Noted as one of the world’s top 10 drives by many media outlets, Cape Breton Island is a must-see destination. In particular, the 300 kilometer (185 mile) Cabot Trail scenic drive draws thousands of tourists each year, adding much needed revenue to the otherwise struggling economy of Cape Breton.

The Cabot Trail, completed in 1932, is named for John Cabot who landed in Atlantic Canada in 1497.   It is now agreed by most historians that Cabot’s first landing was in Newfoundland rather than Nova Scotia as was once believed.

Typically a driving destination, there are some breathtaking and challenging cycling opportunities, too. Cycle Nova Scotia provides online route guidance for cycling the Cabot Trail as well as other Nova Scotia itineraries.  See their online maps at Cabot Trail Route

Several local companies exist who will carry your luggage for you, plan your hotels and leave the riding to you.  A large provider in the area is Free Wheeling Adventures who offer 5-day guided or self-guided tours running every week June through mid-October. Free Wheeling offers cycling trips around the world, but they are Nova Scotians so their tour offers a unique perspective to the area.

The elevation map, highlighting several nasty uphill and downhill sections, made me rethink the wisdom of cycling the whole trail.  Check out the Elevation Map by clicking the “View Maps” on the right of the screen, to get a feel for the challenge that awaits the cyclist.  It’s also important to know that most of the roads on the Cabot Trail don’t have sizable shoulders and in peak season, are very busy.  Personally, I wouldn’t tackle the trail by myself on a bike, though many do.  At a minimum, I would recommend using a guided tour with a support vehicle so it is possible to bail out if the roads get too steep or too busy.

That being said, there are some lovely sections to cycle on one’s own.

We chose to experience cycling on Cape Breton out of the village of Baddeck, situated on Bras d’Or Lake which bisects Cape Breton Island.

Head east out of Baddeck from the tourist office on Chebucto Street.  The road follows along the shore of St. Patrick’s Channel before heading inland.  Enjoy the view to Kidston Island lighthouse.  Continue on until you hit the Trans-Canada highway.  Turning right, the traffic along the Trans-Canada is fairly light and there is an ample shoulder, making for a reasonably safe ride.  Continue on to St. Ann for a lunch stop at Lobster Galley Restaurant overlooking St. Ann’s Harbour.

If you like, head further along for another kilometer to the Gaelic College in St. Ann, the only Gaelic college in North America.  If you’re Scottish, you can buy a tie in your clan tartan or any number of other tartan souvenirs.

Heading home along the same route will provide a 50 kilometer ride.

Plan on spending a couple days in Baddeck.  The most surprising aspect of Baddeck for me is its connection to the life of Alexander Graham Bell.  Bell and his family spent 30 years in Baddeck, initially only in the summer and then year round, after buying 600 acres of land on the shore of Bras d’Or lake which he loved because it reminded him of his native Scotland.  His estate, Beinn Bhreagh, is not clearly visible from the village but a sail on the Amoeba Schooner out of Baddeck Harbour will take you within view of his home.  The estate is also open for limited public tours in mid-October, which can be arranged through the tourist office in Baddeck. 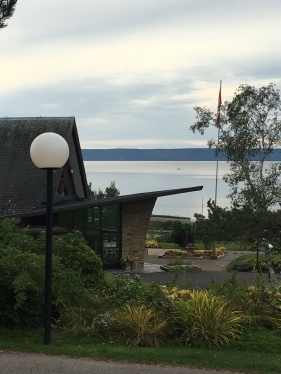 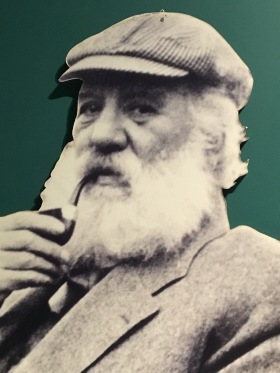 Visit the Alexander Graham Bell National Historic Site to understand Bell’s history in Baddeck. Though his development of the telephone was done in the United States, Bell’s development of airplane and hydrofoil technology is more closely tied to Baddeck.  The first air flight in Canada (and the British Commonwealth) occurred on the frozen lake of Bras d’Or in 1909 in Bell’s Silver Dart.  It was also the first plane in North America to fly more than one kilometer.  The museum houses a replica of the Silver Dart which was built to celebrate the 100th anniversary in 2009 of its first flight.   It is easy to spend a half day touring the museum.

Dine at the Baddeck Lobster Suppers where one can feast on local lobster plus unlimited seafood chowder and unlimited mussels steamed in white wine and garlic.  Even in mid-October, which is beyond peak tourist season, there was a large and enthusiastic crowd.

There are several other gently rolling stretches along the Cabot Trail for the more conservative cyclists.

Margaree Forks to Chéticamp or to Petit Étang would make a beautiful ride through farm land, along the Margaree River and the Northumberland Strait. 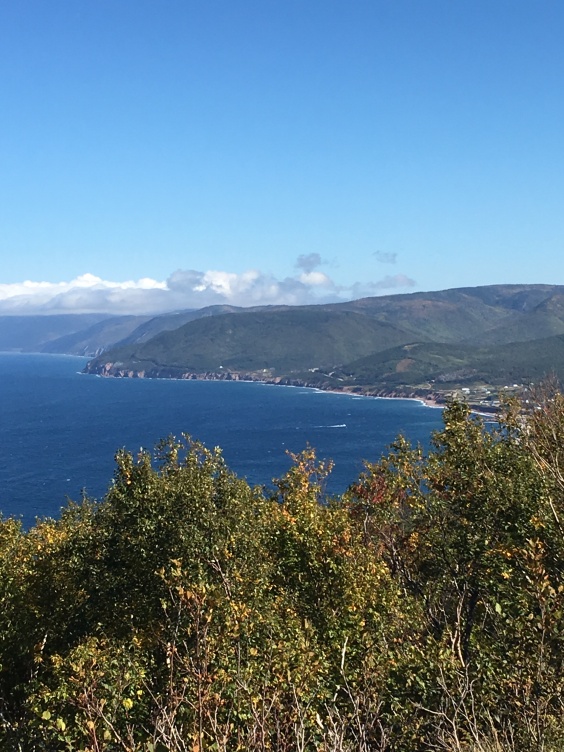 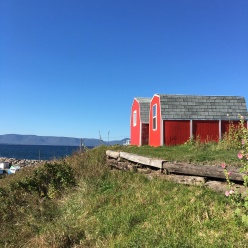 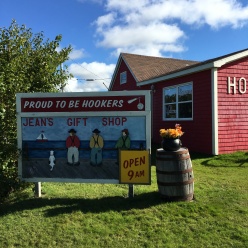 Cape Breton has both a Scottish (Gaelic) and a French (Acadian) history and the Chéticamp / Petit Étang area is Acadian.  Chéticamp is renowned for its hooked rugs, but as the population ages, these old skills are dying out.  Visit Les Trois Pignons (check it out here), the hooked rug museum in Chéticamp with remarkably beautiful examples of this art or look to buy your own at Proud to be Hookers in Petit Étang.

If golf gets you excited, there are three world class golf courses on Cape Breton. 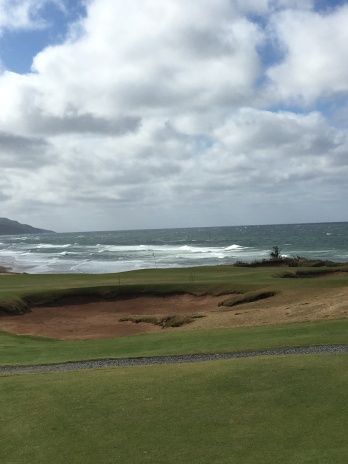 Two, Cabot Links and Cabot Cliffs, are located in Inverness, on the west coast of Cape Breton, just off the Trail.  They are ranked in the top 100 courses in the world by Golf Digest Magazine. (They are ranked as number 1 and 4 in Canada.) They are expensive, but worth the splurge. Both are links-style courses, hugging the coast, offering spectacular views over the Northumberland Strait. 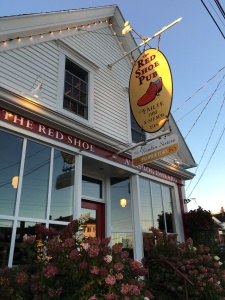 While in Inverness, make the 20 minute drive to Mabou and have dinner at the Red Shoe Pub, run by two sisters from the Canadian Juno award-winning Rankin Family who hail from Mabou.  Every evening, live Celtic music can be heard in the restaurant.  On the way back to Inverness, stop for a nightcap at the Breton Distillery, the award-winning Canadian distiller of whisky in the style of Scotch.  They aren’t allowed to call it “Scotch” though as it isn’t distilled in Scotland.

The other golfing destination not to be missed is Canadian Stanley Thompson’s design, Highland Links Golf Club at Keltic Lodge in Ingonish Beach.  Completely different in style from the Cabot Links and Cliffs courses, Highland Links was cut out from virgin forest in the 1940’s using buck saws and horses, as part of a Canadian government make-work project during the depression.  The course has stood the test of time.  Considered by some to be Thompson’s best design, it routinely ranks in the top 10 golf courses in Canada.

Just the name brings to mind great adventure and it doesn’t disappoint.  After spending more than a week here, we harbor memories of beautiful landscapes and a culture deeply rooted in its Gaelic and Acadian history.  It’s a place worth knowing.

Cycling maps for other Nova Scotia destinations can be found at www.cyclenovascotia.ca

To discover more about the Cabot Trail history, www.cabottrail.com/history.html