Today, we left the Loire River for the day, heading south to the Cher River. Following one of the châteaux cycling routes, we went to see Château Chenonceau, which oddly enough is in the town of Chenonceaux. I wonder why the château and the town names are not spelled the same. I have yet to find the answer to this question.

This château was built in the 16th century and is the loveliest of the châteaux we have seen. It is unique in that part of the château actually sits over the Cher River, supported by six arches. Architecturally, it is quite unique, and certainly beautiful.

Dennis was commenting yesterday that the daily life of the château isn’t evident when touring them. Where were the kitchens? Where did the staff live? How did they function, serving such large groups of people? Some of these questions were answered today, at least as they pertained to this château. We could tour the kitchens and the staff quarters, which were “decorated” to simulate life in the days when they were functional dwellings. Our tour of the grounds also included the vegetable gardens and the stables that supported the château.  (Some of the photos aren’t as clear as I would like, but the kitchens were quite dark and we are not permitted to use a flash inside.) 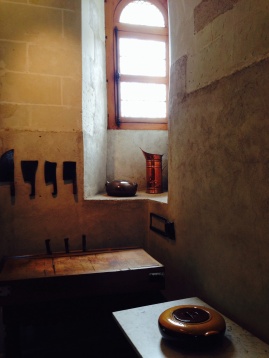 It was also interesting to me to read the history of the ownership of the château. It was given by King Henry II to his mistress, Diane de Poitiers. In the information leaflet provided, she is described as “his favourite lady” rather than his mistress. I find this coy phrasing quite funny, especially for the French, who have the reputation of being quite comfortable with maintaining mistresses.

In the afternoon, we rode back to the Loire River, crossing through wine growing areas, and into Tours. The largest city in the area, it is a busy university city, with an exciting vibe.  There is an interesting contrast between the historic and the modern in Tours.

3 thoughts on “Touring on to Tours”