Here’s the story about tonight’s rest stop.   Waupun was to be called Waubun, meaning “dawn of day” in Ojibwa, but someone working for the State of Wisconsin made a spelling error and the town never bothered to change it.  (I can empathize with this poor guy.  As I was writing this post, I had to keep checking the spelling of the city name, only to find that I actually spelled it incorrectly.)  Every place has its own little peculiarity and that is it for Waubun/Waupun.

But there is more to Waupun than this story.  A small city of only 11,000 residents, it boasts the largest “per-capita” collection of outdoor sculptures in North America.  After arriving in town (130 kilometers from our start in Manitowac), I passed the chance for a cooling beverage and instead toured Waupun by bike to see their art.

All of these sculptures were made possible by the generous donations of the town’s most successful entrepreneur, Clarence Shaler.  There are eight sculptures, six of which were made by Shaler, who took up bronze work at the age of 70.

End of the Trail

The End of the Trail sculpture is in the town’s Shaler Park and is listed on the National Register of Historic sites.  The bronze is made by James Earle Fraser who was a significant American sculptor in the early 20th century.

This bronze is situated in the town cemetery, in a beautiful shaded site and is also on the National Register of Historic sites.  Shaler commissioned the work to honor his wife at the time of her death. 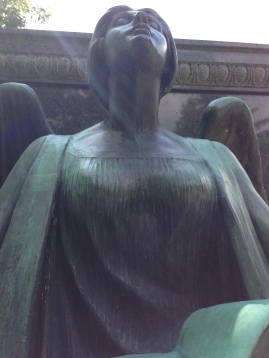 Here are some favorite photos from some of the other sculptures:

Who Sows Believes in God 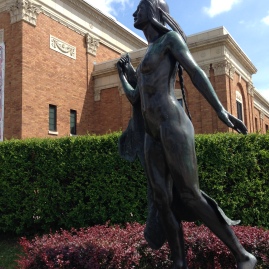 There’s a link to a website with all the details:  Waupun – City of Sculpture